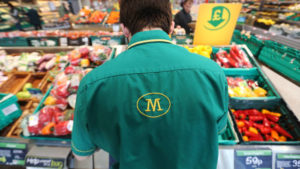 Wm Morrison has declared another special dividend — its third in a year — as growth in its wholesale operation continued to offset a moderating performance in the supermarkets.

The UK’s fourth-largest grocer said it would pay out a special dividend of 4p a share, on top of payouts of 4p last March and 2p in September, after reporting underlying pre-tax profit of £406m for the year to January 2019

Analysts had been forecasting £407m of full-year profit, according to consensus figures compiled by the company. Last year the group reported £374m.

Same-store sales in the group’s 498 supermarkets were up 1.5 per cent, while growth in the wholesale business — which supplies convenience store chain McColl’s, several petrol station operators and Amazon — was 3.3 per cent. Wholesale has given the Bradford-based company exposure to convenience retail after it sold its own convenience stores in 2015, and allows it to leverage its significant manufacturing and processing capacity. It said that a target for achieving £700m of wholesale revenue had been achieved ahead of plan.

David Potts, chief executive, said: “A third consecutive year of strong sales and profit growth, and a total annual dividend up over 150 per cent during those three years, show the Morrisons turnround is well on track.”

“We remain confident that Morrisons still has many sales and profit growth opportunities ahead, and expect that growth to be meaningful and sustainable.”

Investors had expected that Morrisons, whose store estate is still biased to the north of England and Scotland, would look to acquire any stores that Asda and J Sainsbury were required to divest as a condition for permitting their merger. However, the Competition and Markets Authority has raised the prospect that it could block the combination of the UK’s second- and third-largest supermarkets altogether.