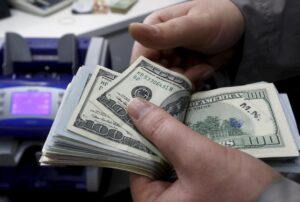 The U.S. dollar pushed higher in early European trade Wednesday, with the euro under pressure, with the intensifying conflict in Ukraine prompting demand for the world’s reserve currency.

Russian forces have intensified the bombardment of Ukrainian cities, warning residents of Kyiv to leave as a miles-long convoy of armored vehicles draws near to the capital.

This is resulting in traders seeking out the dollar, the globe’s reserve currency, main safe haven, and most liquid asset.

“Recent headlines that Russia is escalating nuclear preparations and that the west is imposing increasingly tough sanctions, including freezing assets and cutting off certain Russian entities from the SWIFT interbank communications network, suggest that the risk-off tone may linger throughout the week and potentially beyond,” said Matthew Weller, Global Head of Market Research at GAIN Capital.

The ruble is continuing to decline despite the Bank of Russia doubling its key interest rate to 20%, as investors weighed the impact of tough economic sanctions on Russia.

But of the major currencies, it’s the euro that is being hit hardest as the severe sanctions on Russia and surging oil prices raised concerns about a hit to Europe’s economy and growth.

“Although there are not many reasons to be long of euros at the moment, from a technical perspective, the potential seems to be building for a short-squeeze,” said Jeffrey Halley, OANDA’s Senior Market Analyst for Asia Pacific. “A new Ukraine-Russia meeting or progress by China in brokering some sort of ceasefire would be enough to spark a 200 point rally.”

Traders will look to the release of Eurozone CPI data later in the session, with the European Central Bank having to balance between surging inflation and the potential for a hefty hit to growth in the region on the back of Russia’s invasion of Ukraine.

Later in the session, Fed Chair Jerome Powell will testify on matters economic before the House Committee on Financial Services, with investors keen to know his thoughts about the potential fallout from the conflict in Ukraine, given the central bank is widely expected to lift interest rates later this month to curb soaring inflation.

Finally, USD/CAD fell 0.1% to 1.2734, with the Bank of Canada expected to start raising interest rates later in the session with inflation at a three-decade high.