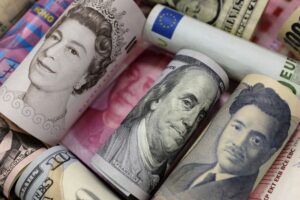 SYDNEY (Reuters) – The dollar rose past the psychological level of 130 yen on Thursday for the first time since 2002, after the Bank of Japan (BOJ) doubled-down on its super-low yield policy, while the euro briefly fell below another symbolic mark of $1.05.

There had been some market speculation the BOJ might step back a little given inflation was rising and other major central banks were tightening, but it showed no hesitation.

The uber-dovish decision set it far apart from the Federal Reserve, where markets are priced for 150 basis points (bps) of hikes in just three meetings, and triggered a fresh rush of funds into the dollar ahead of all else.

“After weeks of confusing comments about the yen from government officials, the BOJ has cut through with a clear message – the global inflation surge is ex-Japan, so zero rates will remain,” said Sean Callow, a senior currency strategist at Westpac in Sydney.

“USD/JPY 130 may be a round number but it cannot be a red line, with attention likely to turn quickly to 135, the 2002 high,” he added. “The yen is not being ignored, but it is mostly a side effect for the BOJ.”

While the BoJ keeps yields near zero, markets are wagering the Fed will hike rates by 50 bps in May, June and July, and ultimately reach 3.0% by the end of the year.

Yields on 10-year notes have climbed 48 bps this month alone to 2.83%, opening a gulf between Japanese debt.

That in turn has helped lift the dollar index, which rose as high as 103.70 on Thursday, its highest in five years. A further push above 103.82 would see it test levels not visited since late 2002.

Other Asian currencies are also under pressure. Versus China’s yuan traded offshore, the dollar reached as high as 6.6562 yuan, its highest since November 2020.

The euro also slid to a more than five-year low of $1.0481, bringing its losses for the month to 5%, which would be its worst pummelling since early 2015.

The currency is now drifting into huge chart support levels stretching from $1.0500 down to a trough from 2017 at $1.0344. A break would take it to depths not seen since 2002 and risk a damaging decline below parity.

The slide only adds to Europe’s economic troubles as it raises the cost of energy priced in dollars, just as natural gas costs soar on Russia’s move to cut off supplies to Poland and Bulgaria.

“This appears to be the first overt act of energy warfare,” warned Helima Croft, head of global commodity research at RBC Capital Markets.

“The question now is whether the cut-off will extend to other major importers in what could quickly become a stark test of European resolve to support Ukraine in the face of surging energy prices and rising recession risks.”

Such risks could also make the European Central Bank reluctant to tighten aggressively, leaving it lagging far behind the Fed. Markets currently see the ECB maybe reaching 0.5% by Christmas.

One possible pot hole for the dollar will be data on U.S. gross domestic product due later on Thursday.

While the market forecast is for growth of 1.1%, the risk is to the downside after the U.S. trade deficit blew out to a record and implied a large drag from net exports.

Analysts at NatWest (LON:NWG) Markets now fear GDP may have actually contracted by an annualised 1.3% in the first quarter. Any negative reading could temper the dollar’s ascent, if only temporarily.