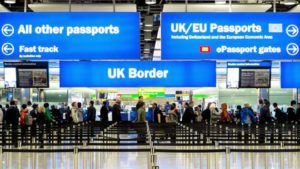 Theresa May will brief key ministers on negotiations with the EU as the government comes under increasing pressure over Brexit.

Ahead of next week’s crunch Brussels summit, the Democratic Unionist Party has threatened to withdraw its support for the government if it is not happy with the final Brexit deal.

And the EU renewed its criticism of her plans for post-Brexit trade.

Some Conservative MPs are also calling on her to change course.

DUP ‘could oppose Budget’ over Brexit deal
Brexit negotiators working ‘day and night’
New Brexit checks ‘needed on GB-NI goods’
The UK and the EU have yet to strike a deal on how Brexit will work, with less than six months to go before the UK leaves on 29 March.

Mrs May says she is working for a deal and has urged MPs to “put the national interest first” and support it.

She has called a special meeting of cabinet ministers to discuss the situation – the BBC’s Ben Wright said it was not expected to be a decision making moment but wasis an opportunity to “bind ministers into Number 10’s approach”.

Meanwhile the EU says its negotiators are working “day and night” to try to reach an agreement ahead of Wednesday’s summit.

One of the key things they have not yet agreed is how to prevent there being new border checks between Northern Ireland and the Republic of Ireland, which is a member of the EU.

The UK is expected to come up with new proposals as an alternative to the “backstop” put forward by the EU – which the government has rejected, saying it would threaten the integrity of the UK.

It’s not surprising given what’s at stake, and that we are seven days away from a critical EU summit. But it’s not a drama that can easily be dismissed.

The government’s backers the DUP are threatening to pull support if the PM doesn’t bend to their position on Brexit. Don’t be in any doubt, that could in theory mean the government collapsing because they can’t get anything done.

Rather than pulling back from the threat, the DUP will in the next 24 hours be trying to turn the pressure up even further.

Mrs May relies on DUP support in key votes because the Conservatives do not have a majority in the House of Commons.

On Wednesday it was revealed that the DUP was prepared to vote against the Budget on 29 October – which could threaten the future of the government – if there are any new barriers between Northern Ireland and the rest of the UK as a result of Brexit.

And in a vote on the Agriculture Bill, it did not back the Conservatives in what DUP sources said was a “warning shot” for the government.

Writing in the Daily Telegraph, the DUP’s Brexit spokesman, Sammy Wilson, said “briefings and leaks” suggested the UK might consider arrangements that could exclude Northern Ireland from the UK’s trade deals or lead to checks on goods arriving from Great Britain.

“If the government is putting these proposals into the public domain to test the water, our advice is to get its toe out quickly or it is going to get burned,” he wrote.

Mr Wilson warned that if the government decides to “leave part of the UK languishing in the stifling embrace of the EU” it would be “totally unacceptable” and would have implications for its domestic agenda as well as Brexit.

Brexit: All you need to know
At-a-glance: The UK’s four Brexit options
On Wednesday, EU chief negotiator Michel Barnier said there would have to be checks on goods travelling to Northern Ireland from the rest of the UK, because they would effectively be arriving in the EU’s single market if there was no hard border with the Republic of Ireland.

“I understand why such procedures are politically sensitive,” he said, but added “Brexit was not our choice, it is the choice of the UK.”

The EU and UK have agreed that these checks “cannot be performed at the border” and the EU proposes to carry them out “in the least intrusive way possible”, he said.Former Prime Minister Sir John Major, meanwhile, has said he has “great sympathy” for Mrs May, telling the BBC’s Political Thinking podcast that “the way she’s being treated by some of her colleagues is absolutely outrageous”.

Sir John said the “intolerable” behaviour of EU rebels during his premiership in the 1990s was “not nearly as intolerable as the way the prime minister is being treated”.

He hit out the “not so subliminal bullying” by Tories opposing her strategy in the middle of negotiations and also criticised International Development Secretary Penny Mordaunt, who declined to give the PM’s plan her explicit backing when asked earlier this week.

“If people are sitting in cabinet they either support the government’s policy or they don’t sit in cabinet,” Sir John said.